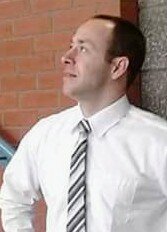 Obituary of Benjamin Edward May

Please share a memory of Benjamin to include in a keepsake book for family and friends.
View Tribute Book

Suddenly at his residence in Burnaby B.C. on December 15, 2021, Benjamin May formerly of London in his 40th year.

Beloved husband of Melanie May (nee: Brest).  Cherished son of Ramona (nee: Conley) and the late Peter Charles May.  Loving brother of Tara Campbell, Julie MacFarlane and Dakota Douglas May.  Proud uncle of Ashton, Oliver, Dean, Eliza, Andrew, Aaron, and Sadie.  Survived by many aunts, uncles, cousins galore, and an endless amount of friends near and far.  Predeceased by his grandparents Joan (Ealing, May) Mallon, Benjamin James May, Yvonne (Fisher) Conley, his uncle Robert James May, and his cousin Seth Robert May.

Benjamin was born in London, Ontario on June 16th, 1982, grew up in Schenectady, New York, moved back to London as a teenager and eventually grew to his adulthood, moved out west, married his wife Melanie and settled in Burnaby, B.C.  At a very young age Benjamin would validate any and everyone he met.  He would not let them go without a compliment of sort.  Whether it was their hat, face, shoes, or a book in hand, he liked them to feel noticed.  Ben also had a love for music, anything, anytime, any space.  Benjamin loved his family, he embraced his nieces and nephews like no others.  He touched so many people, friends, and family with his gentleman manner.  He was truly loved and will always be missed.

To all of Benjamin’s loved ones, family, friends, and acquaintances not able to attend the interment please come by and sign the guestbook during a Celebration of Life, commemorating what would have been Ben’s 40th birthday, hosted at 501 Hale Street, London, N5W 1G7.

A Memorial Tree was planted for Benjamin
We are deeply sorry for your loss ~ the staff at Elliott-Madill Funeral Home Ltd.
Join in honoring their life - plant a memorial tree
Online Memory & Photo Sharing Event
Online Event
About this Event

Share Your Memory of
Benjamin
Upload Your Memory View All Memories
Be the first to upload a memory!
Share A Memory
Plant a Tree