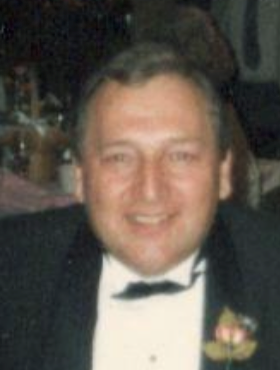 Please share a memory of George to include in a keepsake book for family and friends.
View Tribute Book

Suddenly at South Huron Hospital, Exeter on Tuesday, November 30th, 2021. J. George Moffatt of Grand Bend in his 91st year. George was a former resident of London, Dorchester, and Belmont. Beloved husband of Patricia “Pat” Moffatt (nee Champion). He is the loving father of Heather, John and Colleen. Also sadly missed by his  grandchildren and great grandchildren.

A long time London and area resident, George left the O.P.P. in 1960 and pursued business opportunities in radio advertising, owning and operating his own successful furniture store in London. He ventured into the restaurant business operating several restaurants in the London and Hensall areas. He was a well known horse Race Announcer, calling races at Windsor, Western Fair Raceway, Dresden and Clinton. George was an avid Barber Shop singer forming and belonging to the Four Gents quartet performing in the London area. George's strong love of music benefitted many church choirs in the Wingham, Dorchester and Belmont communities. He was an active community volunteer in all the communities he lived in.

At Mr. Moffatts request cremation has taken place. A private family Interment will be held at the Forest Lawn Cemetery, London at a later date. Elliott-Madill Funeral Home entrusted with arrangements. www.elliottmadill.com

A Memorial Tree was planted for George
We are deeply sorry for your loss ~ the staff at Elliott-Madill Funeral Home Ltd.
Join in honoring their life - plant a memorial tree
Online Memory & Photo Sharing Event
Online Event
About this Event

Share Your Memory of
George
Upload Your Memory View All Memories
Be the first to upload a memory!
Share A Memory
Plant a Tree