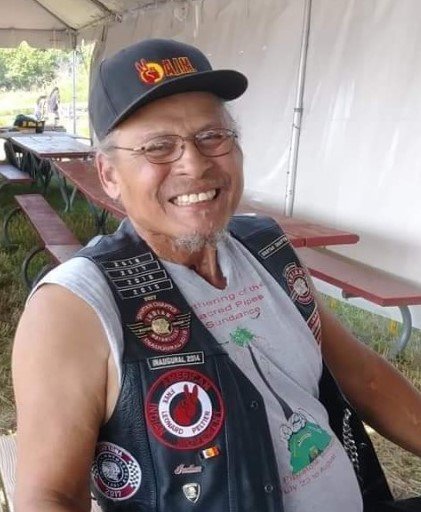 At his residence in Windsor, on Saturday, January 2nd, 2021, Bryan Douglas Halfday of Chippewas of the Thames First Nation in his 74th year.  Beloved husband of Helen Wolfe.  Loving father of Bryan II, Carla and Clifford and step-daughter Kimberley.  Proud grandpa and great grandpa of seven grandchildren and one great-grand daughter. Predeceased by his father, WIllis Halfday, mother Edith Hatton-Halfday and brother Brett Halfday. Dear brother of Andre, Brenda and Sheila.  Many aunts, uncles, nieces, nephews, and cousins also survive.  Bryan was the North East Regional Director for American Indian Movement (AIM); an elected board member of the AIM Grand Governing Council and the co-founder and President of AIM Michigan.  He served as the Head of Security at the Gathering of the Sacred Pipes Sundance in Pipestone, Minnesota.  His experience, leadership and mentorship will truly be missed.  A Celebration of Bryan’s life will be held at a later date.  Interment Colbourne Cemetery, Chippewa.  Elliott-Madill Funeral Home entrusted with arrangements.

A Memorial Tree was planted for Bryan
We are deeply sorry for your loss ~ the staff at Elliott-Madill Funeral Home Ltd.
Join in honoring their life - plant a memorial tree

Share Your Memory of
Bryan
Upload Your Memory View All Memories
Be the first to upload a memory!
Share A Memory
Plant a Tree